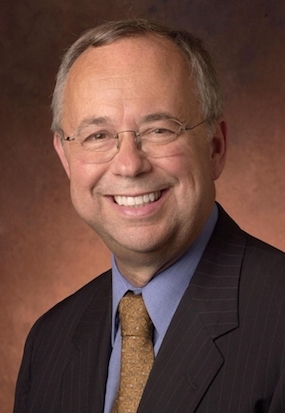 Bill received a BBA and MBA from Ohio University and a JD from the University of Santa Clara.  Bill’s career includes four years in the Air Force where he received the Bronze Star, 25 years in management positions in Silicon Valley and ten years in academia.

Bill started his business career in the early 70s at Fairchild Semiconductor and was literally at ground zero during the beginning years of the computer revolution. Bill was involved in several start-up operations and one turn around. Bill’s positions included VP of Marketing and Sales, VP of Operations and General Manager of a key division of a Fortune 500 company, LSI Logic.

Between his management and academic careers, Bill and his wife, Janet spent two years sailing their 46-foot boat, Camelot, across the South Pacific.

After their sailing adventure, Bill was the Associate Provost for Information Technology and CIO for Ohio University. Bill was also an Executive in Residence at the College of Business at Ohio University and the Program Director for a $5 million U.S. Department of Labor WIRED grant for workforce development for young people in Appalachian Ohio in Interactive Digital Technology. Bill has also facilitated corporate training programs for the Ohio University Without Boundaries program and has taught senior and graduate level e-business management classes for the colleges of business and engineering.

In addition to academic pursuits, Bill was a founding member and chairman of the eTech Ohio Commission, a State agency, which oversaw the State K-12 IT infrastructure for 680 school districts as well as content streaming for the Public Broadcasting System in order to connect technology and education for the benefit of the citizens of Ohio. Bill is also a founding member of the Ohio Tech Angel Fund, which is now one of the largest Angel Investor Groups in the United States.

Bill and Janet now reside on Bainbridge Island, Washington where Bill is a member of the Association of Professional Futurists, the Singularity University and the Oatmeal Club. Bill’s hobbies include welding, writing, media arts, gardening, and wood working.